Our sonnet competition has received some very good entries - but not enough of them! While we are delighted with the standard of the entries, we do hope more people can be encouraged to send in their sonnets.

Originally, we barred members of the Club from entering, but entry numbers to date suggest that perhaps most of the people who write sonnets are already members of The Shakespeare Club of Western Australia! Therefore, the Committee has decided to open the competition to members of the Club. Members are advised that they must not enter under their own names, but use a nom-de-plume, so that the judging can take place on a level playing field.

So come on, members! Pay homage to our beloved bard by putting pen to paper. Or, rather, fingers to keyboard!
Posted by Satima Flavell at 2:17 AM No comments:

Several members (see an earlier review below, from our president) have seen this film and enjoyed it, and Natalie has also written a review:

I went along to the Windsor cinema to see the film Shakespeare Live! from the RSC, not knowing what to expect, but convinced that I would be in for a wonderful few hours. It was full of surprises and though realizing at the end that I was out of touch with many of the new ways of presenting things, I left exhilarated.

The film began with scenes of Stratford, the theatre & its history and a few places associated with Shakespeare’s life; then brought us into the theatre with an audience. From time to time throughout the show, a film would be thrown on a screen at the back or above the back of the stage, and it worked smoothly on the whole. The gang fight and ‘Tonight’ from West Side Story began the performance, followed immediately by the balcony scene from Romeo and Juliet. This prepared us well for a program consisting of scenes from the plays plus extracts from the works of artists from other countries in varied forms such as dance, opera and music – all inspired by Shakespeare!

The show was compered by David Tennant, and featured many notable thespians including Dame Judi Dench, Sir Ian McKellen, Dame Helen Mirren, Benedict Cumberbatch, Tim Minchin, Rufus Wainwright, John Lithgow, David Suchet, Rory Kinnear and Joseph Fiennes. Artistic Director Gregory Doran is to be congratulated on assembling such a notable cast. We got a marvelous ‘Brush up your Shakespeare’ from Cole Porter’s Kiss me Kate, complete with a Jimmy Durante; a melting duet from Berlioz and a chuckling chorus from Verdi’s Falstaff as well as the straight plays.

The balcony scene was the highlight for me: the young actress had charm & a young voice full of light and shade. She is surely an up-and-coming to look out for. The actor playing Macbeth impressed me very much and the murder scene was another highlight. The death of Cleopatra seen at close quarters was certainly another. I thought Paul Schofield had walked on to join the group of former Hamlets in the ‘To be or not to be’, skit but it turned out to be Ian McKellen when he turned full face. Still, nothing wrong with that, and a lovely moment!

One scene that surprised me and made me wonder why it had not been done that way always was the proposal in Henry V. I wonder what others who have seen the film thought? Olivier & Renee Asherson were banished forever by these young independent young royals; yet I was puzzled as to how the scene would fit into the play when seen as a whole.

Words in the Hip Hop theatre were lost on me because I could not keep my attention from the dancers’ fascinating trousers. My companion singled out Malvolio’s combined embarrassment and ambition as a highlight and I was sorry this act was over so quickly.

Overall, I missed most of the words of the sonnets, luxuriating in the nice, slow delivery of the Royal Shakespeare players. Some of the effects that particularly caught my eye were the out-of-this-world fairies (blue) on Titania’s float, Bottom’s ears, Macbeth’s dangling tie, the Prince of Denmark’s ruff, and the snake in Cleopatra’s hands. How I would love to see those productions in full, I thought as I left, compiling my own little program!

PS: Photos (by Helen Maybank) are from the Royal Shakespeare Company's website. And if you can't get to see this amazing film, you can buy the DVD from the site.
Posted by Satima Flavell at 7:49 PM 1 comment:

Once again, Frances, our Fearless Leader, has turned her sharp and probing mind to a film performance, this time of the Royal Shakespeare Company's 400th anniversary tribute. Here's what she has to say:

What an absorbing and invigorating experience it was, to see on screen the RSC’s tribute to Shakespeare, exactly as it was performed in that magnificent one-off concert on 23rd April.

The programme was clearly planned not only to show Shakespeare’s work, but also to reveal that work’s influence on so many other art forms. Mingled with many of the best-known and best-loved scenes from the plays we had excerpts from musicals, ballet, opera and even hip-hop: something for every taste and every age.

There was so much packed into three hours that it’s impossible to comment on everything.  I prefer to indulge myself with remembering my favourites.

If I were presenting awards, equal first would go to Antony Sher for his rollicking but very subtle Falstaff, and Rory Kinnear for his intensely horror-struck Macbeth. Harriet Walter would be right behind them for her fine Cleopatra, and Ian McKellen, who gave us a passionate and topical passage from Sir Thomas More.

Other highlights: Paapa Essiedu’s delivery of “To be or not…..” It would be a major challenge for any actor to follow the hilarious discussion on the appropriate placing of emphasis in the soliloquy’s first sentence, but Essiedu took it beautifully in his stride, allowing the audience to settle and then holding us with his thoughtful interpretation. Alex Hassell’s Henry V made the king’s proposal to Catherine funnier and much more appealing than most versions, and in another scene, as Prince Hal was a perfect foil for Sher’s Falstaff.  Al Murray’s portrayal of Bottom made a lovably cuddly and comical character.

For me special items from other genres included: the love scene from the ballet Romeo and Juliet with Prokofiev’s music; a modern ballet version of Desdemona’s murder, to Duke Ellington’s Black and Tan Fantasy; and the smoothest “Brush Up Your Shakespeare” (from Cole Porter’s Kiss Me Kate) which Henry Goodman and Rufus Hound performed with soft-shoe insouciance and infectious enjoyment.

There were some quirky items. One was a hip-hop performance, in which a speaker? reciter? chanter? “spoke” well-known phrases from the plays in a seemingly random order. In fact I realised by the end that it wasn’t random;  there was a planned sequence of repetition.  He controlled the pace of his delivery sufficiently to allow much of the content to be heard and I think it was probably very cleverly put together, but I need a lot more practice in listening to this art form. (A printed script would have helped.) The accompanying dancer? gymnast? was fascinating to watch but rather a distraction from the spoken words.

Another oddity (to me) was Sonnet 29 (“When in disgrace with fortune…”) composed and sung by Rufus Wainwright. He is certainly not the first to set sonnets to music, but I’m sure he must be the first to need such a Big Band to back him. The music swelled to such an extent that it almost overwhelmed the sense of the words and seemed to require a Cinemascope screen of images to accompany it.

The programme was arranged to follow Shakespeare’s literary life from the earlier to the maturer comedies, through the great tragedies to the late plays. The perfect choice for a prologue, therefore, was The Seven Ages of Man.  Each age was illustrated with an appropriate modern character, but for me the impact and the poignancy of the speech came when it was revealed at the end that each was not a Type, but a “real” inhabitant of Stratford  --  from the baby born in the local hospital, to the “lean and slippered pantaloon” who was a retired backstage employee of the theatre. 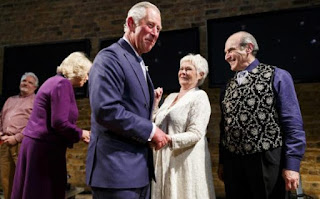 The conclusion was equally well chosen, with Oberon and Titania (played by David Suchet and Judi Dench) and Puck (David Tennant) giving us the fairies’ blessings. I confess to having been slightly taken aback by such elderly royal fairies, but in a moment common sense re-asserted itself:  of course, fairies are ageless, or are older than time.

These are just some of the impressions remaining with me, and I may well have omitted scenes which others would have picked as the high spots. Unfortunately I am relying on my shaky memory; cinemas don’t provide a printed programme. I hope my remarks will provoke other club members who saw the film to offer their own opinions, and to comment on (and probably correct) my thoughts.
Posted by Satima Flavell at 4:18 AM No comments:

The Shakespeare Club of Western Australia, generally known as The Perth Shakespeare Club (founded in 1930) usually meets at 2.00PM on the third Saturday of each month (except January) at Citiplace, on the Perth Railway Station. It is close to the WA Art Gallery so if you don't come on the train you can park your horseless carriage in the carpark beneath the Art Gallery. Our annual subscription is affordable for students and pensioners.

Over the course of the year, we usually read several plays, enjoy hearing an occasional guest speaker, maybe watch a film or two, and throw a couple of parties as well. Works are chosen by vote at the AGM each March. In 2017 we read Shakespeare's Richard III and Henry IV part one, and we ventured into the work of another Elizabethan playwright, John Webster, by tackling his somewhat horrific oeuvre, The Duchess of Malfi.
New members are always welcome - just turn up at 2.00PM on the third Saturday of any month except January. To access the meeting, you will need to go around the back of Citiplace to the door off the arcade that leads to the Barrack St Bridge.
The webmistress of the blog is Satima Flavell, and anything that's not Blogger's fault is probably hers.